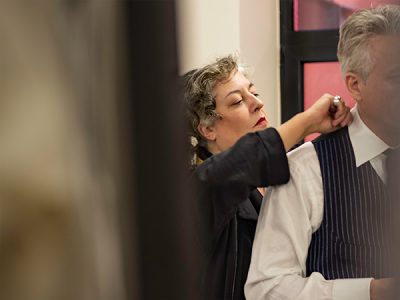 Terrassa was very present this Sunday during the celebration of the gala of the twelfth edition of the Gaudí Awards of the Catalan Film Academy. Two films shot in part in different locations in Terrassa have achieved recognition from the Catalan Film Academy. This is the case of “La hija de un ladrón” (The daughter of a thief), a film that Terrassa chose to record some of his scenes and directed by the graduated of the Superior School of Cinema and Audiovisual of Catalonia, Belén Funes, has won a total of 3 awards , among them the one of best film in non-Catalan language, best direction and best script, which he shares with Marçal Cebrián. In addition, the film “Siete razones para huir” (Seven reasons to flee) by directors Gerard Quinto, Esteve Soler and David Torres, and shot in part at the Mas Vivero de Torrebonica has won the public’s special award for the best film.

The Gaudí for best costumes has also had an especial accent of Terrassa. The designer Mercè Paloma, from Terrassa, aspired to get her fourth award, although it has finally been by Rosa Tharrats for her work on ‘Liberté’. In addition, those in charge of delivering the award have been the actress Rosa Cadafalch and Jan Cornet, both from Terrassa. During their speech, both have highlighted the role and position of Terrassa within the Audiovisual industry.

The mayor of Terrassa, Jordi Ballart, explained that: “In recent years, and with the recognition of Terrassa as a Creative City of UNESCO, the city has strengthened its position within the audiovisual sector, becoming a national and international benchmark. This has also allowed to start a close collaboration with the Catalan Film Academy that has allowed, among other projects, celebrated in the city the act of appointment of the Members of Honor of the 2019 Academy or that the Audiovisual Park of Catalonia hosted the Fiesta de Catalan Cinema Summer last June A series of initiatives that have helped to make the city of Terrassa visible as one of the most important audiovisual ecosystems in the country“.

Ballart also wanted to “Congratulate the Higher School of Cinema and Audiovisuals of Catalonia, ESCAC, which in the framework of the celebration of its 25 years of history, has once again been meant as a great film talent factory“.