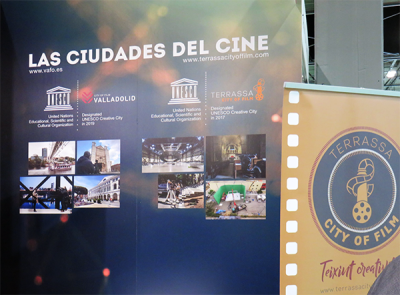 The Terrassa Film Office with the two Spanish film cities, Terrassa and Valladolid, will be sharing their booth at FITUR Cine/Screen Tourism in Madrid from the 22nd to the 26th of January. This is the second edition of the monographic section of the Fair specializing in film tourism, a sector that has gained prominence in recent years and has become an important tool for disseminating and projecting the city. The boom in interest in visiting the places where movies and series have been shot has opened up a significant promotion opportunity.

Spain with the recent recognition of Valladolid as a Creative City of Cinema by Unesco becomes the second country with two cities with this badge. The two sister cities show the advantage of this creative network in stimulating the audiovisual sector. On Thursday 23rd, they will participate in a round table organized by the Spain Film Commission on the potential of recognizing Unesco as a Creative City of Cinema.

This global meeting aimed at connecting the tourism and film industry is attended by members of both Cities of Film, the Film Office and the City Council: Pep Forn, Councilor for Tourism and Audiovisual Projects in Terrassa, and Juan Manuel Guimeráns, director of the Department of Culture and Tourism, and coordinator of the Valladolid Film Commission. The Councilor for Tourism and Audiovisual Projects explains that “The presence of Terrassa in FITUR allows us to intensify contacts to publicize the tourist offer of our city and to work to attract more quality tourism, emphasizing those elements that we they distinguish, as in the case of industrial modernism, the material and intangible cultural heritage or film tourism”.