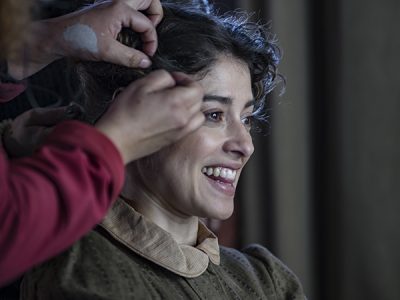 Terrassa breath cinema during all the year being an open stage to filming. Over the past 10 years, more than 1,500 productions have been shot in the city. This last season has placed us as a city of reference in the audiovisual industry. The stages and locations of the Parc Audiovisual and of the city of Terrassa has been the focus of 7 productions that participate in the next edition of the Gaudí Awards, four of which are also candidates for the Goya Awards. In addition, five short films produced by ESCAC Films have been selected in the ten shorts for the next edition of the Gaudí Awards.

‘La hija de un ladrón’, ‘L’enigma Verdaguer’, ‘La filla d’algú’, ‘7 raons per fugir’, ‘After the letargy’, ‘El legado en los huesos – Trilogia de Baztan’ and ‘Paradise Hills’; the nomination candidates who will opt for the statues of the XII edition of the awards of the Catalan Film Academy. It will be presented by the actress Anna Moliner on January 19 in the Auditorium Forum of the CCIB.

Four of these films –‘7 raons per fugir’, ‘La hija de un ladrón’, ‘El legado en los huesos – Trilogia de Baztan’ and ‘Paradise Hills’ – will also opt for the Goya awards. Malaga will host the 34th edition of the gala on January 25th, the advance on the date of the Oscars has affected the calendar of all the awards of European cinemas.

On the other hand, five short films, which are part of the final degree projects or ESCAC graduate short films, produced by ESCAC Films have been selected as candidates for the Gaudí Awards. “Ama” by Júlia de Paz; “Adalamadrina” by Carlota Oms; “Benidorm”, by Claudia Costafreda; “No me despertéis”, by Sara Fantova and “Tahrib” by Gerard Vidal. T

“Ama” has participated in festivals such as the MECAL or the Tel Aviv Student Film festival. “Adalamadrina” participated in the official section of the prestigious Sundance festival and the D’A Film festival. “Benidorm 2017” won the award for the best actress in the last edition of the Malaga festival. For his part, “No me despertéis”, he attended the Rotterdam festival and won second prize at the Alcalá de Henares Film Festival. Regarding “Tahrib”, which is also shortlisted for the Goya Awards, has participated in 100 national and international festivals, and has been awarded more than thirty awards.

One more year, many productions that chose our city as an open-film set are the main prizes of Catalonia and Spain –this year being a record– a pride for a UNESCO city of cinema like Terrassa.